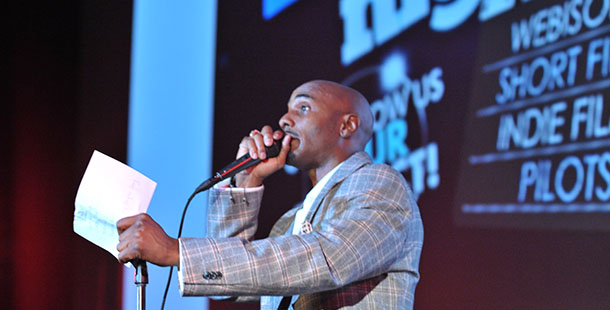 Dave made his way to Hollywood after receiving a Bachelor of Arts from Morehouse College. He credits college friend Morris Chestnut with giving him his introduction to Hollywood. Dave currently sets up Morris’ appearances throughout the country, as well as other well-known celebrities in Hollywood. Brown found success in Hollywood, both in motion pictures and television, but he also sought out a night-life in the City of Angels.

His inaugural endeavor, a networking First Sundays venture called Out Of Sight/Out Of Mind was an instant smash. His soirees became so successful, that they became weekly gatherings. Brown insured that the party had the brilliant combination of all the right types in Hollywood, a soothing, laid-back but festive environment would be a must-attend event.

He used his name to foray into many lucrative arenas, some obvious, such as filmmaking (Aqua Line Films) and others quite unexpected (high-end water with blinged-out Swarovski crystals on the bottles, selling for $75 throughout Europe and at the Delano Hotel in Miami), all serving to align the name Dave Brown with quality and excellence.

Brown’s well-known friendship with Academy-Award and Grammy Award winning actor Jamie Foxx, with whom he worked diligently during his Oscar quest, positioned Dave to be a confidante to the actor/singer/comedian. Dave Brown is responsible for executing Jamie Foxx’s Oscar Celebration Event and currently, he works with Foxx’s management team. Brown continues to collaborate with influential pillars in the industry to create events at such a colossal caliber.

Dave Brown brings integrity, fortitude and an uncanny ability to pull things together. The industry veteran doesn’t trifle with his integrity because everything he does has his name attached to it and his name is his brand. I am about building strong relationships and a great rapport. I believe that it’s important to surround yourself with good people and that’s what I am doing in Hollywood. It’s about leaving an imprint, not a soft print.

About Indie Night Film Festival: INDIE NIGHT is a weekly film festival that aims to elevate the craft of artists while giving them an opportunity to showcase their films and network with other new and established filmmakers from all over the globe. Founded by entrepreneur, Dave Brown, the weekly film festival is purposed to be an avenue by which all players in the filmmaking process can network. Brown’s love for linking likeminded individuals to each other lead him to do something about the disconnect he witnessed within the community. He made it his goal to fill the void by developing a reputable platform that serves as an incubator for Hollywoodu2019s emerging talent. Uniting them with heavy weight movers and shakers, Indie Night is an organic movement that continues to give gifted filmmakers a chance to shine, all while cultivating professional relationships. Its’ site will serve as a home to premier top films, Indie Night Pro Classes, and Advertisements.

Indie Night is supported by individuals like Emmy award winning casting director, Robbi Reed, Producer, Datari Turner, Actors, Jamie Foxx and Morris Chestnut, and the late director/producer John Singleton just to name a few of the people that have been apart of the weekly showcases. With a growing presence on the movie scene, Indie Night Film Festival is a one of the go-to events in Hollywood for filmmakers and lovers alike.

We welcome the opportunity to answer your questions, offer more resources and work with you on an article and or interview for Dave Brown and the Indie Night team.

Stay connected to INDIE NIGHT via Facebook https:// www.facebook.com /indienightff, and Instagram http://www.instagram.com/indienightff. Additional information about INDIE NIGHT and details on how to screen a project may be found at www.indienightfilmfestival.com. For press/media/sponsors contact shortfilms@indienightff.com

Thank you for your consideration.